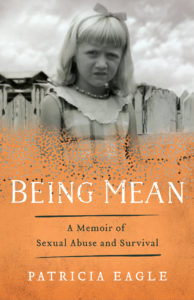 Blogging about sexual abuse is new for me and also a challenge. This post is a first. Since I have recently written a book about sexual abuse and survival, I’ve been encouraged to write about these topics in other forums. But it’s hard. It was difficult enough to get to the place to write my story, which involved arranging considerable support to create stable ground from which to work. Then I’ve had to read and reread my story multiple times in the writing, editing, and proofing process, continuing to experience the impact of what I lived.

I mention in my book, Being Mean (https://patriciaeagle.com/author/), how no one other than therapists ever asked me what happened when I said I had been sexually abused by my dad––not my mother, my sisters, my husband, or my friends. My mother adamantly denied that anything ever happened and refused to listen. My sisters acknowledged that something happened, or may have happened, and one responded she didn’t see how it would help to go there. My spouse often held and comforted me, but never asked for details. Friends listened tenderly to as much as I willingly offered, but didn’t probe.

I’ve come to understand why people don’t ask. Sexual abuse is a sensitive, unsettling topic. Who wants those images? Even I didn’t scratch for details for years after abuse memories began surfacing. This is hard stuff to hear about or face. I let snippets of details gradually fill in gaps in a manner that allowed me to continue interacting with the world. A survivor’s tactic. For example, bit by bit I pieced together why I opened the door of my dad’s semi while it was rolling, to a memory of crawling into his sleeping space with him earlier in that same afternoon, to his angry response when I asked him if what we did together was sex.

Random puzzle pieces finally find their place in the big picture. But few people seem to want to see the final jigsaw composition.

Memory strengthens like a muscle. In my experience, memories are triggered by sounds to smells to flashes of images. For years the sound of a camper door sliding shut transported me briefly to a camping trip with my dad to the ocean, and I would feel danger and immediately block out that memory’s images and sensations. To stay with a memory I had to learn to trust that I could handle whatever came up, and that took the guidance of excellent therapists, carefully arrived upon medications, the consistent support of my spouse, and the gentle love and care of friends, regardless of how or at what pace memories surfaced.

This all surfaced for me last night on my second viewing of the HBO film, “The Tale” (https://www.hbo.com/movies/the-tale). Jennifer Fox, the writer and director, has turned her experience of childhood sexual abuse into a film that creatively shows one way memories resurface. I related to the slow peeling back of layers of memories experienced by the main character, superbly played by Laura Dern. Fox has received criticism for showing scenes of sexual abuse with a thirteen year old by a forty year old (the child in these scenes is played by an adult double). Apparently some viewers believe that childhood sexual experiences don’t need to be portrayed.

I wonder, why is it accepted to see so many movie scenes of murder, violence, pornography, or romanticized and unrealistic sex?

Do we need to be reminded how prevalent childhood sexual abuse is, considering weekly stories of the many thousands of children who suffered or are suffering abuse by Catholic priests or other clergy, gymnastic coaches, team doctors, teachers at elite private schools, neighbors or family members? Maybe it’s time to see some scenes of children being carefully coerced and experiencing such trauma so that it will move us to finally stop such predatory behavior, an entitlement for perpetrators, it seems to me, accepted for hundreds of years. Uncover these secrets and let the world see what it allows.