Eight degrees in Alamosa is not that cold in the context of San Luis Valley winters. Our first winter here it got down to forty below, and our new Texas neighbors behind us noisily packed up and moved in the middle of that frosty night. But eight degrees in the wee morning hours felt plenty chilly as I stood in our backyard, clad in my robe and furry slippers, watching our newest adopted dog watch me.

“C’mon, Ruffi. Do your business already.”

Ruffino looked at me, then at the top of the 6’ wooden fence he’s been nimbly hopping since we adopted him a few days ago after hearing there was a dog in the shelter identical to our other dog, most likely a sibling.

Orion was popping out in the new moon sky, even though I couldn’t look at it long for fear of Ruffi making a sudden escape.

“Geez, little guy, you couldn’t find a better home than this one. Why do you want to bolt?” In all other ways he had been the perfect companion for his sister, Mercy Mercy Me: great on the leash, house trained, didn’t chew or bark, and affectionate with both humans and canines.

I relinquished Ruffi to the shelter today. After four days of chase––not easy for Bill’s and my 66 year-old knees–– and after barricading our fence where possible and zipping outside in efforts to zap an electronic collar the moment Ruffi’s paws hit the fence, we gave up. I was afraid Mercy would watch and learn, and that my heart would become increasingly attached to a dog that would soon disappear or be hit by a car. Ruffi needs a country rather than an urban setting.

I’m a fool for dogs. One close friend read my memoir’s initial manuscript and commented that there was more in there about dogs than babies. (Well, after all, I responded, despite four, maybe five pregnancies, I didn’t birth any children.)

Dogs have saved my life. At age nine, I learned about trust, joy, and healthy affection from my dog, Dabb. He was my constant, there when the school bus pulled up to pick me up and there when it let me out. He was my best friend, and the most assuring love I had ever known at that time. When he was with me, I felt safe. All of these critical experiences for a child navigating childhood sexual abuse. Since age nine, I’ve gone very few years without a dog, or two.

Dogs have helped me survive the complexity of life. If you have or have had dogs (or cats or horses or other creatures), you understand. It’s not “a distracting habit” or “a frivolous past time.” For some of us, we’re talking survival, extended family, essential physical and mental healthcare. My neighbor, a retired ‘Nam colonel with PTSD who lives alone, tells me frequently that he wants to die when his pampered and beloved dog dies. I nod my head each time he tells me this, and feel my heart ache in the way it has for every dog I have loved and lost.

Yeah, I only had Ruffi four days, but I still feel like crying. The difficulty of such a hard decision nags me––the roots a dog can put down so quickly, the initial dream every single time of the years to come that a dog and I will share together, and the wonder of how our love will most assuredly stretch boundaries beyond fur and skin. 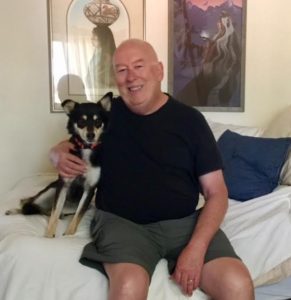 Bill and Mercy Mercy Me