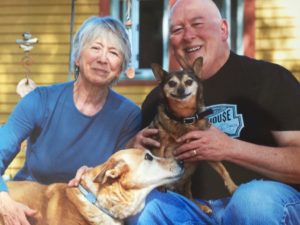 Gavroche Napolean Eagle was a mighty man and the most challenging dog I’ve ever had. He bit more people at Denver’s Max Fund dog shelter than any dog they had ever had at that point, and he bit me five out of the eight times I’ve been bitten by a dog. Max Fund tried to catch this fifteen-pound street critter for over a year, but he was too wily. He knew how to dart and dive from and dodge a dogcatcher. During the adoption process (in 2003), because he had already bitten several people at the shelter, the vet was called to give him his rabies shot before Gavroche (not his name then) left the facility. He bit the vet. After that harrowing scene, I can’t believe I took him home, but I was under pressure from several of my high school students with me who claimed he was “bad like us.” I liked my kids so figured I’d like this dude with a ‘tude soon enough.

His name comes from Hugo’s Les Miserables, a novel I was teaching at the time. Gavroche is the sassy little street urchin who risks his life to steal bullets for the revolutionaries, and in France he is a full-flung hero and even had his own stamp.

Gavroche the dog almost didn’t make the cut. He was such a nightmare the first weeks I had him, I called Max Fund to investigate the chances of returning him. They understood and agreed to take him back, but I decided to wait and see how he behaved with Bill, who was coming for his first visit in Denver after our ten-year-divorce from one another. Bill was not much of a dog person at that time, but within fifteen minutes of his arrival, Gavroche was literally eating out of Bill’s hand. Man to man––it was a sight to behold.

Gavroche thought big. In efforts to make other dogs think he was larger than he was, he would hike his leg so high he sometimes fell over. He was also a man of habits who insisted he be fed right on time. No amount of food was enough. After all, he had been scavenging for food on the streets for at least a year when Max Fund finally caught him. Since we limited his rations after he started looking like a football, he spent an inordinate amount of time hyper-vigilant in our kitchen waiting for anything to fall onto the floor as we sliced veggies and prepped meat. He ate everything, even lettuce and broccoli. We never reached for anything that had fallen. It would have been like sticking our hand in a shark pool.

After wandering off once during a trip to our acres on the southern slope of Mount Little Bear, he lost his freedom of being off-leash after over two hours of being coyote and eagle bait. Despite spending the next 13 years on a leash whenever we were out, “Fat Boy” never let a single walk go by without finding something to eat, whether a chicken bone, random French fry, coyote turd, cat tootsie roll or candy wrapper. And nooo, I learned to never take anything from his snarly, snappy mouth.

In our fenced backyard, Gavy would dig, usually around the compost pile, sniffing like he was about to unearth a big Mac. He dreamed large, and he dug with such a frenzy he could balance on his back legs as his front legs cycled feverishly, throwing up so much dirt it looked like a dust devil.

After dinner he humped, like clockwork, traveling from room to room, wherever he had a dog bed and a blanket. We used to say he had a bitch in every port. He would pull his blanket off a bed and go after it, humping himself breathless. After a significant amount of this exercise, he’d pass out, snoring contentedly. “Mr. Man,” I called him.

What, you might ask, did we love about this little rat terrier/miniature pinscher mix of trouble? Well, he was grateful, never letting a day slip by without expressing his love with stinky licks, loving eyes, and wide, sweet grins. He cherished his sisters­­––Pookie then Amber Grace. He adored his stuffed Monkey, whose nose he would suck on until he fell asleep during daytime naps, his little paws wrapped tenderly around his toy’s neck. The little low guttural noise he made right as he fell asleep alwaysmade me smile. “Monkey Man” was another one of his many nicknames.

We were clearly Gavroche’s pack and, without a doubt, he loved all of us. Yes, for his full 16 (or 17) years he packed a punch into almost everything he did with admirable bravado, but at his core he was a scared little street dog who always wanted to feel safe, loved, and be part of a family. He was a lucky, lucky dog, and our lives were enriched with his feisty spirit.

It’s not easy taking responsibility to let a dog go. Gavy’s sense of smell, eyesight and hearing dimmed so that he was running into things and occasionally falling. His pleasures became limited to eating, sleeping, peeing on his walks, and infrequent cuddles. We let our decision be based on his incontinence and recent lack of bowel control. I can only hope someone will be so kind to me when that time comes. In the last weeks he would wake up barking, I think at the pack of dogs I’ve had in my life urging him to c’mon home.

Gavroche is survived by his new sister of two months, Mercy Mercy Me, his parents, Bill and Patricia Eagle, and his godmother, Carolyn Laetz. 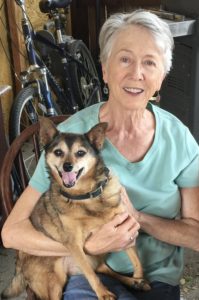