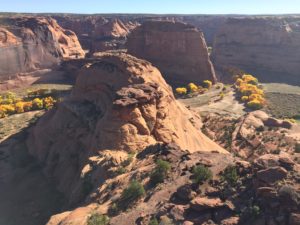 Finding Ernest wasn’t likely, but it was worth spreading the word with every Navaho I encountered while visiting Chinle, Arizona and Canyon de Chelly. News travels at its own pace on the reservation, and I hoped someone would tell him I was looking for him.

“Used to be a hiking guide down in the canyon. Played a flute.” Without a word the motel clerk shook his head, as did the server in the motel cafeteria and a motel cleaning woman. Two Navajos I saw hiking the next day squinted their eyes and looked away from me before saying they had heard of him. The young woman at the gift shop thought she had a CD of him playing the flute. All out.

It’s a different world in Indian lands. Bill and I had driven up from the Phoenix area that day, through hundreds of miles dotted with Hogans, often surrounded by several vehicles, sometimes a corral close by. In the more populated areas, which may have been several blocks long, homes were usually clustered together and surrounded by a tall chain-link fence. Several high schools also had tall fences, some with coiled wire on top. In Chinle the elementary school resembled a prison, although I frequently think public schools look like prisons, and have even taught in a few of those. 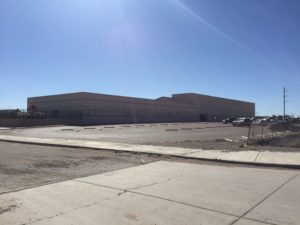 But as we drove through the vast, open terrain, our breaths deepened. A Paul Horn and Carlos Nakai CD, actually recorded in Canyon de Chelly, pulled us forward.

Ernest took me on a hike down into the canyon in 1997, the story told in detail in my book, something I hoped to share with him. (I changed his name after several people suggested I find a Navajo name, however my world feels bigger for having met Ernest, Navajo-sounding name or not.) At the end of an evening group hike, he had offered me a private hike the next day, deep into the heart of the canyon. I saw the land he farmed as a boy and learned to sound “HO” in a way he found acceptable. We were quiet more than we talked. Ancient steps and handholds in the rock pulsed with energy, while the wind snaked around canyon curves and corners singing the sacred. Although known as Canyon de Chelly, to the Diné (the Navajo) it is a physical and spiritual home known as Tsegi (Say-ih), and is a landscape whose features hold meaning and spirituality. The canyon is an epicenter of their culture. 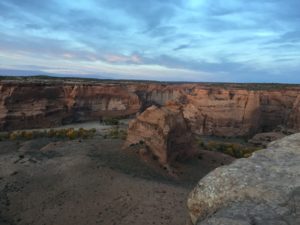 Bill and I let canyon views seep into us from designated viewpoints, then packed up for our trek home. Bill wanted to stop at a restaurant he had spotted. We walked through a sea of black hair and beautiful skin tones the colors of canyon walls to our table. Glancing around we could see we were two of six whites among fifty plus Navajo. Two park rangers were at one table, and Bill thought I should ask them about Ernest. They didn’t know him but said they would ask around, and I gave them my card. After gorging on hot, crisp Navajo bread with slight ribbing by our waitress about how I had eaten it all, I went for one final query, “Do you know Ernest Jones who . . .”

“Yeah, I know him.” I didn’t even get my description out. The last person I asked knew him. She looked my age, which was Ernest’s age too, so it made sense. Maybe people in town were talking about the gray-haired white woman who kept asking about Ernest, so our waitress had a heads up. Said she’d let him know when she ran across him, slipping my turquoise business card into her front pocket.

Waiting by the front door for Bill I noticed an elderly Navajo man next to a woman about my age. He had on a WWII cap. “My dad was in WWII,” I said, bending over close, asking where he had served.

“The Pacific,” he replied, smiling warmly. When I told him that’s where my dad had been, he reached out and gently took my hand. Just then his family arrived, and as each person greeted him with hugs and kisses, the woman beside him walked over and hugged me. She looked into my eyes and smiled. I was baffled, having questioned a dozen Navajo at this point, experiencing scant reaction or eye contact. I watched the man’s family gingerly shepherd him on as Bill and I exited the restaurant.

I considered how it’s taken me a long time to learn trust. Understandably after multiple massacres, long walks, internments, and flimsy treaties, the Navajo have plenty of reason to be slow to trust any white person. In a recent Mother Jones article by Terese Mailhot she writes how Native People are “happy to be seen, finally––not as mascots or advertising icons or mystic ghosts, but as people alive struggling in the aftermath of colonization.” Reading her article I recognize how much I have to understand about the Indigenous People of my own country.

Maybe I’ll hear from Ernest or maybe I won’t, but the search was worth it, landing me in the arms of a kind Navajo woman who I hadn’t even asked about him. Instead, I respectfully connected with her family’s elder. Maybe that’s what I’d been doing wrong––questioning without first connecting. In a hurry, only two days here, had my own agenda, another bumbling Non-Indigenous outsider. Next time I’ll let the canyon hold me longer and keep myself open to the sacred.